The Wall Street Journal recently published an article about New York and cities around the world looking into tolling not just freeways, but individual roads in an effort to curb traffic jams. New York is known for its heavy traffic and hustle and bustle lifestyle. New York has seen heavy traffic times create longer traffic jams slowing travel time from 6mph to 4mph on average recently in certain areas. The study cites increased ride sharing drivers and decreased road space like bike lanes as one of the causes of increased traffic. 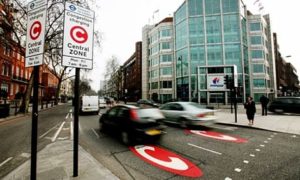 London has had tolls on some of their major roads to help ease congestion since 2003. The Wall Street Journal stated that congestion was eased by 30% the first couple years following implementation. However, congestion has risen again with the rise of Uber and Lyft drivers who constantly circle the heaviest traffic areas and are exempt from such charges.

The city of Seattle also has traffic congestion issues not just caused by car accidents on the road. Seattle has much more people living and working in the city than ever before because of increased technology jobs booming the city which adds to the traffic. Additionally, Seattle has tried to combat traffic and pollution by cutting down lanes by adding bike lanes, which has further added to traffic times. 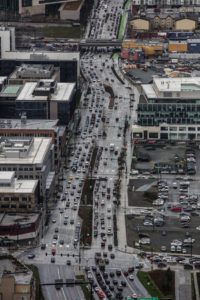 The city of Seattle is spending $200 million on a study this year to determine if a toll on some of it’s busiest roads would help fund city roads and ease congestion. The study most likely is targeting the ever crowded Mercer Street in Seattle that is getting busier and busier as new building continue to emerge around Amazon and other tech leading companies.

Tolling roads will most likely lead to angry drivers and congestion in other parts of the city, as many people are not satisfied with current methods of alternative transportation such as buses, bikes, and trains. The trains do not go to many smaller suburbs of the city and do not reach far enough for commuters to realistically change their habits of driving into the city. Bus times often take far longer than driving your car into the city and do not give many people the freedom that they covet. However, tolling roads would add a source of revenue to the city to fund expansion of light rail and repair city roads that are constantly falling apart.