If you are injured in a motorcycle accident in Seattle, you should hire a Seattle personal injury lawyer to look into the facts of your case. Most insurance companies are biased against motorcycle riders and feel like they are unsafe people in general. However, this is not the case. Motorcyclists are just like every other person who enjoys the freedom of driving with the wind in their hair/helmet.

Motorcyclists are just like all other drivers on the road, plus a little more maneuverability. However, when someone cuts off a motorcyclist, they cannot merely slam on their brakes and be ok. When a motorcycle slams on its brakes, it severely increases the ability of the driver to be thrown over the handle bars or the bike from sliding out. This means if a car drives in front of a car at the last second and the rider ditches their bike or falls off, the car that cut off the biker is at fault for any resulting injuries to the motorcyclist.

Motorcycles are hard to see but it is not their fault

Some people claim that motorcycles are hard to see so they cannot be at fault for cutting off a motorcycle, illegally changing lanes in front of them, or coming into contact with them on a lane chance. Not heading the right of way to a motorcycle driver while going down the street is not a good excuse for car drivers who cause a motorcycle driver to fall off their bike and crash. The car driver will be at fault 100% of the time.

Being injured in a motorcycle accident can leave the driver of the bike unconscious, whereby they cannot defend themselves if the other driver says the motorcycle driver was driving too fast, speeding, etc. that caused them not to see the motorcycle. There is a bias against motorcycles that are street bikes because people believe these people are racing at all times. This could not be further from the truth. However, this is why it is important for motorcycle riders to have mounted cameras on their bikes to act as an independent witness in case no one sees the motorcycle accident.

If you are injured in a motorcycle accident, contact a Seattle motorcycle accident injury lawyer today for a free consultation. We are paid out of the settlement so there are never any out of pocket fee costs to you. Call today (206) 850-6716.

Andrew CherinMotorcycle cut off and crashes, who is at fault?04.18.2018
Read more

Riding a motorcycle is fun to do in the summer time. The wind in your face, the feel of the open road, the freedom to go wherever you please, it doesn’t get much better than that. Everyone knows the inherent risks of riding a motorcycle, but the benefits often outweigh the risks. The thrill of the ride. 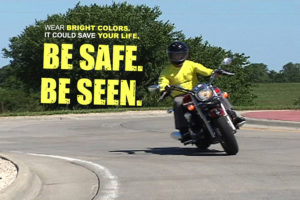 Motorcycles are dangerous because of their vulnerability to crashing and high likelihood of severe injuries suffered by the rider if there is a crash. Motorcyclists are only protected by the protective clothes they wear like leather coats, jackets, vests, and pants – of course the helmet as well. Any time a rider is struck by a car, there is a high likelihood of hitting the pavement and even being run over by other cars.

Motorcycles are often hit by cars because people in cars do not see them. However, when I think of not being able to see a motorcycle, I think of not seeing them on the freeway when someone merges and doesn’t see them. However, would you be surprised to hear that 70% of motorcycle accidents occur at intersections?! I was when I saw this. The reason behind this was that drivers were not likely to see the motorcycle when they were turning across the intersection into the motorcycle because they were looking for a car, much larger object.

Along with this statistic, it would not be surprising then to know that nearly 2/3 of motorcycle accidents are the fault of the car driver and not the motorcycle rider. Not being able to see someone riding a motorcycle is not an excuse, as you would imagine.

What can you do to prevent being hit by a car if you are on a motorcycle to avoid an accident?

If you are injured in a Seattle motorcycle accident, call today for a free consultation. We are paid out of the settlement and not hourly so everyone can afford a Seattle personal injury lawyer but you cannot afford not to hire one.