The city of Seattle is notoriously bad at all things related to traffic. There is so much poor planning on the part of the department of transportation in Seattle and Washington that it is no surprise that we are one of the worst cities for traffic in the US, number 6 in the US according to US News in 2015. 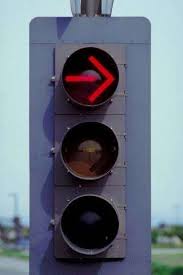 What adds to the traffic is poor street sign design and implementation. Most people see red turn arrows and think that they cannot turn in the direction of the arrow when it is red. I was just sitting behind someone in traffic today that had a red turn arrow and mistakenly believed that they could not turn right on red. I let her know that she could turn right by honking my horn a couple of times, the polite thing to do, right?

Contrary to common belief, you can turn right on a red turn arrow. A red turn arrow is treated like a normal red light stop light. You must stop at the light and then proceed to make your turn if traffic is clear.

The only time where you are not allowed to turn right on a red turn arrow is when there is another sign that states no turn on red.

Here is the law in Washington State on red turn arrows:

Why then put a red turn signal stop sign if it acts exactly like another red light? To confuse people? I think the reasoning behind placing in the red turn arrow was to let people know you can only turn right in this lane. However, this just confuses people more and causes traffic to bottle neck up.