I came across an article in the Wall Street Journal from October 12, 2016 that stated that driving slow and steady in traffic is better at relieving traffic than tailgaters who are actually causing traffic jams. 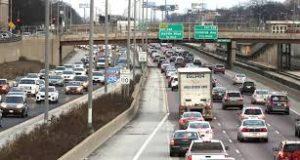 The article was written around a theory by Seattle engineer William Beaty. Mr. Beaty theorized that by driving slower and leaving a gap in front of you, you can maintain your speed while allowing others to merge or exit in front of you as they please, easing bottlenecks.

The theory is that traffic jams are created when people who are not in the exit lane but need to get into the exit lane merge over at the last second but are blocked by people not allowing them in by tailgating. This causes the lane that the person trying to exit to slow down because the late merging car needs to get over first before they can go around them. This can push traffic back for miles depending on how congested traffic is at the time.

People that tailgate leave no room for people to merge into an exit lane or from an onramp, slowing down traffic behind that car. This pushes traffic back, when had they let the car merge into their lane, traffic in the last minute exiter or merger could continue to move freely without braking.

The theory is that if everyone left space for others to merge over or let people merge over as soon as they want, traffic would freely flow, assuming that everyone is driving at the same speed. Speeders, tailgaters, last minute decision makers are the ones that are actually causing traffic jams, not the slow steady moving traffic people.

Tailgating causes car accidents when the car in front of them unexpectantly has to slam on their brakes. This causes a rear end car accident and injuries to the person and backs up traffic for miles as the cars have to pull over to the side of the road or sit their waiting for ambulance, tow trucks, and or police to arrive. Car accidents can block multiple lanes and even the whole freeway depending on how severe the injuries suffered in the car accident are.

Seattle already has some of the worst traffic in the US and it is only getting worse with some estimates stating 250 people are moving into the city every day. We do not have the best bus, light rail, or train system set up to handle the large amount of people that have to commute into Seattle every day so we must learn to be better drivers and avoid car accidents as much as possible.

Popular thought is that people need to speed and shorten distance between cars in order for traffic to continue to flow. This new theory comes counter to popular thinking but could work, if everyone maintained speed and did not accelerate, allowing others to merge in front of them so that traffic continues to flow with no one hitting their brakes.