An article in the Wall Street Journal over the weekend stated that speed limits on highways around the nation are increasing instead of decreasing. Most studies show that car accident injuries become more severe when speed is increased so a move around the country to increase speeds is contrary to popular knowledge of safety mechanisms to decrease severe car accident injuries. 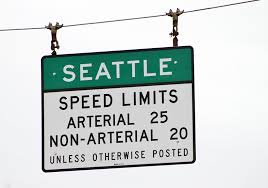 Traffic Fatalities Fall But Could Be Less

The Insurance Institute for Highway Safety estimates that there were nearly 27,000 car accident fatalities from 2000 to 2013 because of higher speed limits. In their study the IHS compared the effects of all states increase in speed limits from 1992-2013 when deciding what would have happened had speed limits stayed at federal limits of 55mph.

How Is the Speed Limit Set

Surprisingly, traditional speed limits are set within 5mph of the speed at which 85% of vehicles travel along a roadway in free-flowing traffic. This guideline is endorsed by the Federal Highway Administration but the National Transportation Safety Board recommends using crash statistics and other factors to set speed limits. Texas increased it’s speed limit 5 mph a year from 70 in 2011 to 85 three years later.

History of the Speed Limit

In 1973 the National speed limit was set at 55mph down from 65 to 75 mph in most rural areas. The decrease in speed limit the next year led to 9,100 fewer car accident related deaths the following year, according to the National Research Council. However, the National limit was repealed in 1995 due everyone’s need to go fast to save time. However, a driver going 80mph compared to someone traveling 75mph will only save two and a half minutes in a 50 mile stretch.

In 2015 in Seattle, 44 pedestrians, 23 bicyclists and 119 people in vehicles were killed or severely injured in car accidents. In an effort to combat car accident related deaths, Seattle has decreased speed limits around the city in order to make it safer for drivers and pedestrians alike.

In 2016, Seattle decreased speed limits city wide by 5mph on all major intercity streets. The former 30-mph limit falls to 25 mph for downtown and connecting central-city arterials, which are generally the streets with more than two lanes, or two-lane streets divided by yellow striping.The residential speed limit of 25 mph falls to 20 mph throughout the city, including hundreds of unmarked roadways — in many cases, too narrow for drivers to safely exceed 20 anyway.