I came across this very scenario the other day while driving but couldn’t figure it out so I let the other guy go first to avoid an accident. If you are approaching an intersection with a stop sign on your side and a stop sign on the other side but non in the center, who has the right of way if you and another car going the opposite way arrive at an intersection and you want to turn left and the want to go straight? Note that you both wait a second for traffic to clear before proceeding. 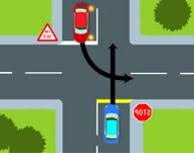 At a four way stop if this had occurred, you would have the right of way because you were first in time. However, this is different as you are planning on turning left and they are going straight in a two way stop. In this situation, it would appear that you must give way to the person going straight across the intersection.

In the alternative, if both vehicles were turning left and a collision occurred, you would have a great argument for being first in time and would in fact have the right of way in this instance. However, you would need an independent witness in order to verify your statement and prove that you were in the right.