Who is at fault if you hit and crash in one of the many potholes around Seattle on a bike?

While many people may say that someone should have seen a pothole and got out of the way, some times it is impossible to see a pothole on the street depending on the conditions, depth of the pothole, and how many other people are on the road. 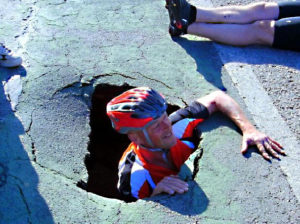 Seattle is becoming notorious for not filling potholes in quickly enough. I am sure you will encounter a pothole on the next drive you take after reading this blog. Whether it is because the city has too many potholes to deal with, they are lazy, or they don’t have time to get to them, the city is responsible for filling pot holes and making sure people are safe on the roads.

If you are injured by a fall due to a pothole in Seattle, you need to hurry to preserve your case. Generally, there is a three year statute of limitations for personal injury cases in Seattle, Washington. This means that you have three years to file a lawsuit or settle a case against the city of Seattle. In addition to this, the city has a notice requirement that states that you must give them 60 days advance notice before filing a lawsuit against the city, in accordance with RCW 4.96.020. This means you must fill out a claim form on Seattle’s municipal website and mail it in to them following the directions on the website.

If you are injured in a bike accident on a Seattle street, it is best to contact a Seattle personal injury lawyer to figure out your rights and compensation possibly owed to you. Most offer free consultations and are paid out of the settlement. This means that everyone can afford a personal injury lawyer, but you cannot afford to not hire one.