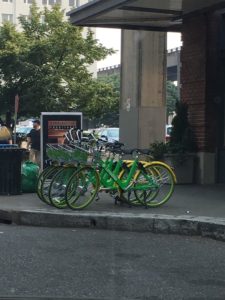 Lime Bikes are different from other bike sharing companies as these bikes are free standing and do not require a docking station to lock up the bikes. The bikes merely can be left on the sidewalk, which is unappealing to many and an eye sore. Lime Bikes have a locking mechanism and a kick stand to keep the bike up right. But the bikes are literally littering the city. LimeBike requests customers to find a spot to park the bike that doesn’t interfere with pedestrians and cars but leaving them on grass cutouts near parked cars makes the appearance of junk sitting out.

Legality of LimeBikes not coming with helmets is another concern. LimeBikes do not come with helmets, which is a law in King County. LimeBike has a disclaimer and informs users that it is against the law to ride a bike without a helmet but who carries a helmet around with them? Most riders I have seen have been taking the bikes for spins without helmets, which the bikes do not prevent you from riding if you don’t have a helmet.

What could LimeBike do to combat the helmet issue? Have helmets attached to the bikes! How is this so hard in today’s world. Yes, there are many different size heads but there are adjustable helmets. People will steal the helmets? Why would they want to steal a helmet and there are methods to prevent the helmet from leaving the bike. What about sanitary helmets? Helmets can include sanitary hair nets to make sure lice and other hair bacteria isn’t transmitted.

To not have a helmet attached to the bike or a nearby helmet dispensary is negligence on the part of LimeBike and could expose them to lawsuits by people who are injured in bike on car accidents or any other accident where the rider hits their head. Studies have shown that people who do not wear a helmet on a bike are much more likely to suffer a traumatic brain injury or death as a result.

LimeBike seems like a cool idea but there are some big kinks to be worked out like biker safety and zones to leave bikes. Yes, it is nice to have a bike readily available but at what cost? It doesn’t have to litter the streets like junk at the expense of the community and being an eye sore. Docking stations are much cleaner and preferred. We don’t need bikes lining the streets and sidewalks like abandoned property, we already have a large homeless problem that liters the streets, sadly.

If you have been injured on a LimeBike, you may have some recourse. Give me a call for a free consultation. Why should this company profit off of just throwing bikes out into the street with little or no responsibility hiding behind a waiver that will not stand up in court? It won’t and can’t.